Typical Operations of Small Flour Mills of the mid-1800s.

The beginnings of a mill

Finding a proper site with enough water power to make flour was the first challenge facing Valentine Oehler.  At the beginnings of the Civil War flour was one of the most important products in Wisconsin. In 1860, flour accounted for 40 percent of the manufactured products in Wisconsin. In the 1870s, flour production dropped off to 25 percent because farmers started growing crops other then wheat and because large national mills put local mills out of business. 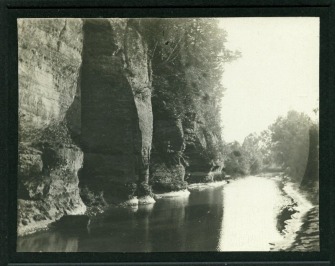 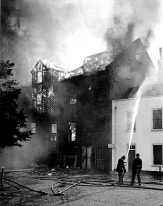 Flour mill fire
Many mills in the area experienced problems with fire.  Mills are at great risk for fire because of the dust that is produced from grinding the wheat.  This dust can build up, become combustible, and ignite. The Oehler Mill never experienced a large fire.

Basic Stone Dam
The Oehler dam site contains stacked limestone rock.  A tunnel was carved out by hand to allow water to flow past the dam when needed.  The dam, built up stream from the mill, works by increasing the speed of the water. The water must flow quickly in order to allow the water power to turn the mill wheel.  The Mormons were correct about the potential of the Oehler Mill site.  The dam when completed could raise the water level up to forty feet. According to city records, the tear dropped shaped mill pond was about a half-mile long and one-eighth of a mile wide. 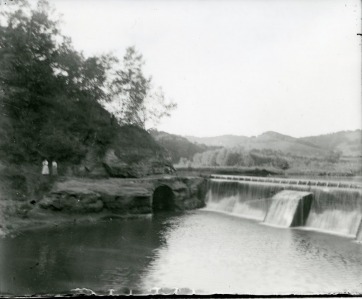 Oehler Mill
The Oehler mill is made of stone and it is two stories high.  Inside the mill there was three run of stone.  The Oehler mill was built before the "new" roller mill technology, which came to La Crosse in the 1880s. Stone ground mills could grind whole-wheat flour, grist, and cornmeal.  Roller mills could make several additional categories of flour and feed then stone mills could. Also roller mills surpassed stone mill's ability to remove non-wheat/food material, and did not require a wooden water wheel.

Horse and cart with wheat
Unlike the larger mills in the area, the Oehler Mill primarily served local, surrounding farmers largely in Mormon Coulee.  Wheat was transported from the farm fields to the mill by horse and cart.  The mill was busiest during the fall harvest.  Sometimes farmers had to wait in line to get their crop turned into Red Rose Flour.  At the Oehler Mill, local farmers were able to enjoy a picnic in the park, the artisan well,  the pavilion, and the cave while they waited.  Farmers would also visit the mill in non-harvest times to get grist ground to feed their livestock. Grist grinding usually kept the miller somewhat busy during the winter months. 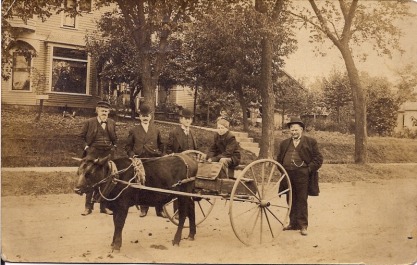 Postcard with Louis Oehler on the right. Sent to his daughter Margaret Oehler (age 6) on Oct. 11, 1907 from New Lisbon, WI. The postcard said 'Those are the horses we use here. -Louis Oehler' 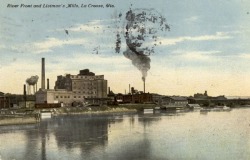 Listman Mill postcard
The Oehler brothers learned their milling skills in Krobern, Altenburg, Saxony, Germany.  It was a common story in the area, that millers gained their skills in Europe and then traveled to the United States in order to obtain an opportunity to own and run their own mill.  John C. Kruger, who worked at the Listman Mill from 1879-1914 and later at the Steensen Mill from 1915-1938, learned his milling skills in Germany.  At age 14 and 15 he was a miller's apprentice, and he received his master millers papers when he was 18. He then immigrated to the United States for more opportunities. 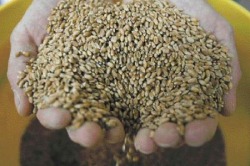 Wheat grain
Millers needed training and that is why they typically apprenticed under a master miller.  Millers need to know about the quality and hardness of the grain in order to make an acceptable product.

Mill wheel
Millers faced many challenges in the up keep of a mill. Rats and other rodents were a constant nuisance. Millers often employed several cats to keep the rodent population in check.  Cats were so important that the miller would make "cat doors" throughout the mill.

The job of the miller was extremely physically demanding and often took a toll on the miller's body. The miller had to carry heavy sacks of grain up and down stairs, and they also had to maintain all of their machinery by hand.  When the wooden wheel would plug up with debris, the miller would have to climb on to the wheel itself in order to clean it. The dust produced when grinding grain was also hazardous to the miller's health. Many millers developed nasty coughs that were caused by the continual day-to-day inhaling of the dust.  Mill dust is so thick and sticky that even in 1980 mill dust was found on the ceiling of the Big Creek Mill in Sparta.

Stone-ground whole-wheat flour
It was not uncommon for metal objects to make their way into the grain or to fall into the product while it is being made.  This problem was corrected by using a metal magnetic bar which would catch the metal objects.  However, despite the miller's efforts foreign objects were not uncommon in the finished product, as the magnetic bar would only stop metal objects. Common contaminates include rat dung and rat poison.

The mill was important economically to farmers, so much so, that in times of flood farmers would often help the miller repair the dike to protect their livelihood. Farmers would also help each other during harvest time, as seen in the photo below. 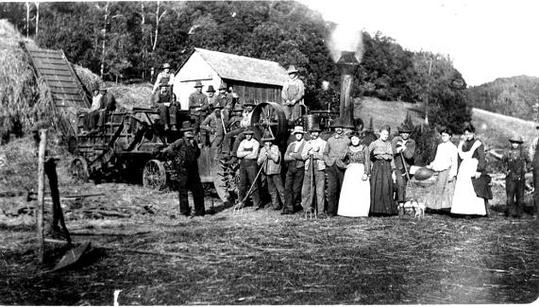 This photo of a thrashing crew shows farmers banning together to assist one another during harvest time. This photo is from Chipmonk Coulee (in south La Crosse and northern Vernon Counties), a community nearby Mormon Coulee/Shelby. Some of this wheat could have very well been ground at the Oehler MIll, 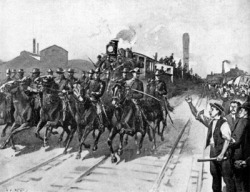 Generic worker organization picture
Millers also had to ban together in order to protect themselves from speculators and railroad companies.  E.V. White of La Crosse called a meeting of millers from southern Minnesota and La Crosse in 1877 to work against speculators buying wheat with no intention of making flour, but instead cornering the market in order to artificially drive up the price in order to rip off the millers.  The millers also found it necessary to organize in order to get fair rates from railroad companies when shipping wheat and flour. 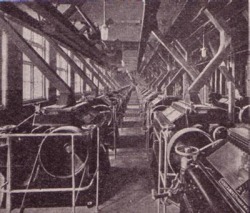 Modern roller mill technology 1890s
Most mills in La Crosse seized operations in the 1920s and 1930s.  Agriculture faced hard times in the 1920s because of overproduction following WWI and those economic difficulties continued throughout the Great Depression.  Also many smaller local mills were put out of business by larger national mills. 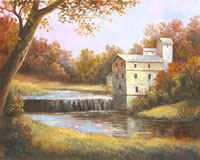 Idealized image
Today mills are often romanticized.  The local library in La Crosse receives many requests for information on mills like the Oehler Mill. Mills are popular subjects for songs, poems, stories, magazines, movies, etc.  The images of the mills often leave out the hard work, dangers, and unclean conditions, and instead focus on more joyous aspects.  For example, a poem by Isaac Bickerstaffe (1735-1812) called "The Jolly Miller" claims that the miller is "so happy that he sang from morn til night."  (Leaving out the difficult physical work of the miller). Mills typically produce feelings of tranquility, peace, and romance in people.  They remind people of a so-called "simpler time."  It was even rumored that Mark Twain considered writing a work about a "flouring mill [that] figures rather picturesquely" for the Northwestern Miller magazine. However, there is no evidence that Twain ever completed the work.