-La Crosse was considered a prime spot for mills because of its commercially significant location between Minneapolis and Chicago, and its vicinity to the Mississippi River and wheat farmers in southeast Minnesota. (This allowed for easy access to and cheaper prices for wheat).  Local newspapers and area trade boards predicted La Crosse would surpass Minneapolis (the main competitor) in flour production because of its location and capability to produce flour for less (in La Crosse it cost 28 cents per barrel of flour vs. 31 cents in Minneapolis); this, however, did not happen in part because the area possessed few large water power sites.

-The number and types of mills fluctuated over time. 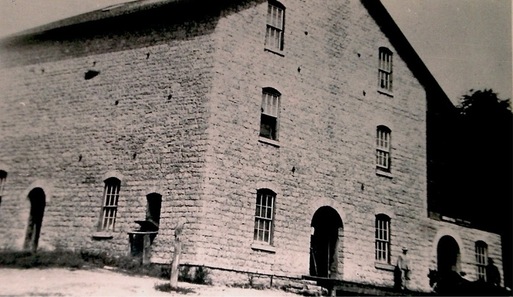 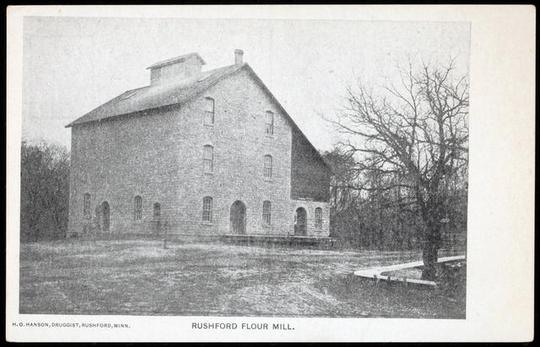 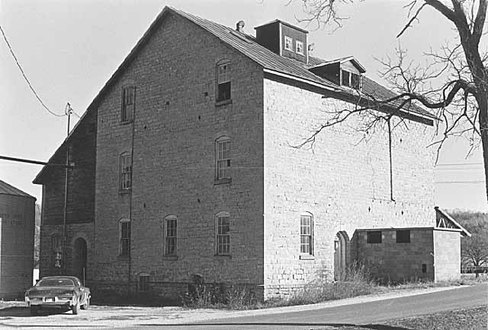 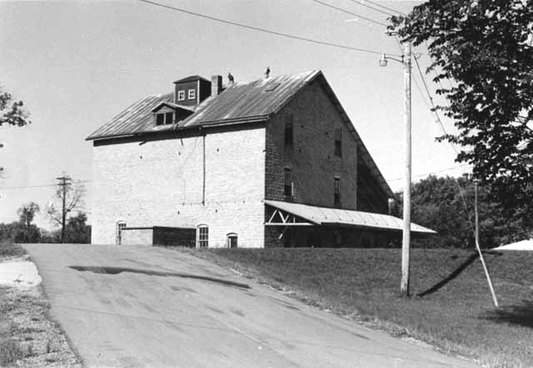 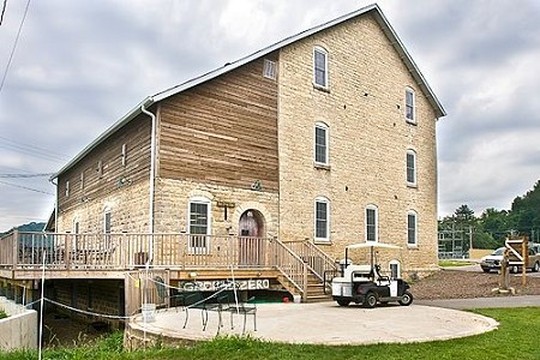 Current photo of the Rushford Flour Mill recently remodeled to be a restaurant after it was a victim of a flood. 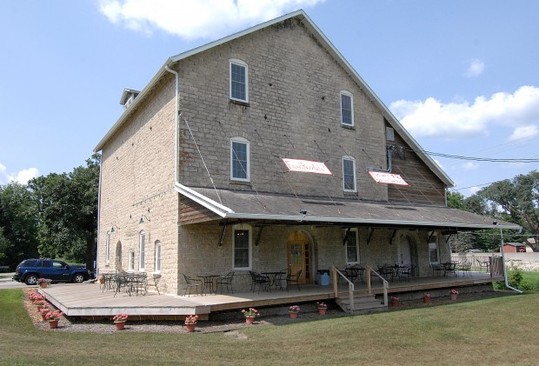 Current photo of the Rushford Flour Mill recently remodeled to be a restaurant after it was a victim of a flood.
Located in Rushford, MN, this mill was owned by John Oehler (until 1948), brother to Louis Oehler. Brothers Fred and Gustav also helped to run this mill. 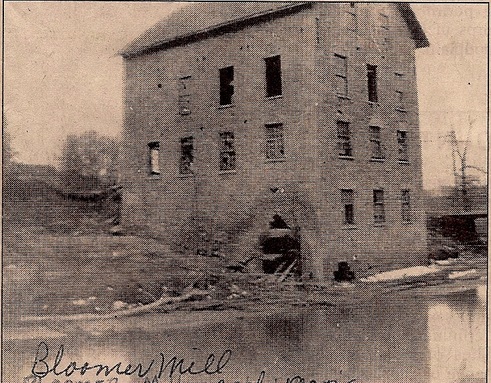 Bloomer Mill on Mormon Creek. Photo from a story printed in the La Crosse Tribune.
Blumer or Bloomer Mill, (spelling differs based on source),  located on Mormon Creek (just up stream from the Oehler Mill) and was owned by Matthias Blumer in 1881. It had 3 run of stone. It was a flour mill, and it was built in 1870.  The mill house was three stories high.  It burnt down sometime before the year 1900. It appears from articles in the early 1900s, found in the La Crosse Tribune, that several of Blumer's neighbors felt like he did not take very good care of his property, which affected those downstream. 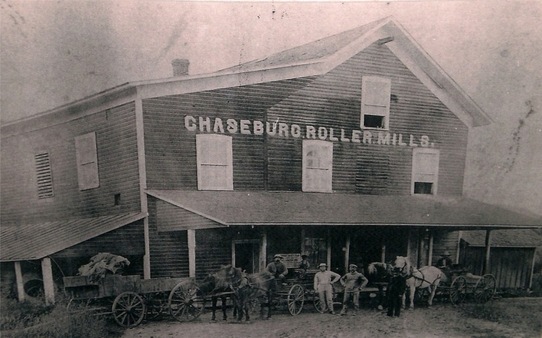 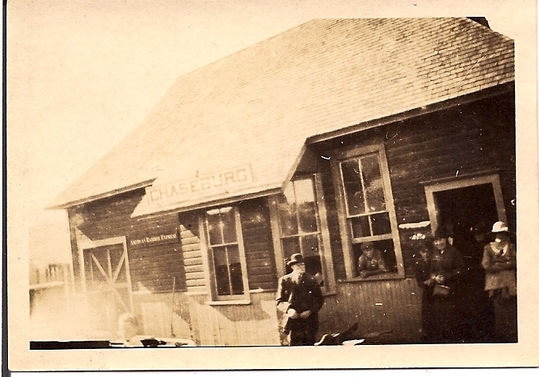 Building (post office?) in Chaseburg, WI.
Chaseburg Roller Mills was owned by Louis Oehler and his partner George Hosmer. The Hosmers had been neighbors of the Oehler family in Mormon Coulee. Louis Oehler, his three children, Elmer, Margaret, and Evelyn, and their house keeper arrived in Chaseburg, WI in order to make their new home there on October 21, 1913. This was immediately after he and George Hosmer bought the flouring mill there from the Graf Brothers. Louis Oehler had the first visitors at his new home five days later. His brother and sister-in-law, Gustav and Margaret Oehler, their two children Wilford and Ester, and Mr. Roesler took an auto ride there (La Crosse Tribune, 21 October 1913, p. 8).  In 1914, the La Crosse Tribune reported on the week-long visit of former neighbor John Hosmer to the Oehler home in Chaseburg, WI (La Crosse Tribune, 3 June 1914, p. 2).

John Hosmer's son, George Hosmer, starting working at the Oehler Mill in Mormon Coulee at a young age. Later in life, he married Louis' daughter Ida Oehler. The Louis Oehler and his children would return frequently to the La Crosse area in order to visit relatives at the Oehler Mill in Mormon Coulee. Elmer Oehler, son of Louis, would also travel to La Crosse in order to attend school. He graduated from the La Crosse High School in 1917.

The Chaseburg Mill was a modern roller flour mill, more technologically advanced than the stone Oehler Mill in Mormon Coulee. In 1914, the La Crosse Tribune reported on the construction and installation of an "electric lighting system" within the Oehler and Hosmer mill. The Tribune boasted that the private electric plant "may later light the village streets and a number of the business places." (La Crosse Tribune, "20 Years Ago Today," 25 August 1934, p. 3). The mill also had a heating system and the best water power in the area. The Tribune wrote that with these features "the mill now ranks with the best of the smaller mills." (La Crosse Tribune, 9 October 1916, p. 8).

In 1916, the La Crosse Tribune reported that Oehler and Hosmer planned to "erect a three story addition to the mill on the east-side" of the building. The report continued stating that "the additional space will be used for storage and some new machinery is to be installed to take care of the ever increasing business." (La Crosse Tribune, "Chaseburg Plans New Buildings," 11 April 1916, p. 9). This addition was completed in October of the same year. The three-story addition was equal to nearly half the former building.

In November of 1916, the partners lost three 100 pound sacks of flour between Chaseburg and La Crosse. They placed an ad in the paper advertising a reward for their return (La Crosse Tribune, 29 November 1916, p. 9).

Louis Oehler operated this mill for about 14 years, until 1927 when he became ill at 69 years of age. The funeral was held on 3rd Street in La Crosse. He was buried in the family cemetery in Mormon Coulee even though his family no longer owned the Oehler Mill. George A. Hosmer died at the age of 84 on September 5, 1941 in Minneapolis, MN. He was buried in the Oehler Family Cemetery in Mormon Coulee. 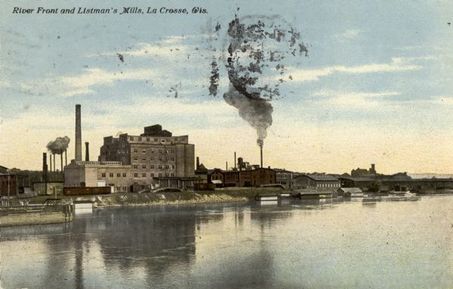 Several years later the mill was rebuilt and produced flour until 1918 when its then owners, The Kansas Flour Mills Corporation closed the mill due to labor issues.  The Kansas business had closed the mill in order to disband the union the workers had formed, which was demanding a change in the work schedule.  When the Kansas company took over they increased the number of hours workers labored per day, decreasing the shifts per day from three to two. The mill was shut down despite it being one of the largest mills in the Great Lakes Region and despite its national distribution.

The corporation retained the building and used it for wheat storage. In 1935, negotiations for another company buying the property ensued, but the sale never materialized because the building caught fire in that year. In 1993, developer Warren Loveland tried to convince current owner of the mill, Cargill Inc., to turn the former mill into a museum about milling in Wisconsin. In the end, the project was deemed to costly as the building was still heavily damaged from the 1935 fire.  The Listman Mill was torn down in 1995.

Other Mills Near La Crosse, WI: